FDA responds to toxic metals in your baby food ?

FDA responds to toxic metals in your baby food ?

The FDA on March 5th , 2021 made the announcement that it’s taking the issue of arsenic, lead, and other toxins in foods for babies and toddlers seriously.

You might recall that there were congressional hearing and reports (Feb4, 21) on this issue after consumers and advocate groups voiced their concerns.

Did you realize that the big four of America’s baby food manufacturers have been selling products that contain high levels of toxic heavy metals for ages ? And you should care because arsenic is associated with developmental defects, cardiovascular disease, neurotoxicity, diabetes and even cancer, according to the World Health Organization. As for lead it can be summarized easily; There is no level of exposure to lead that is known to be without harmful effects, per the WHO . What effects can happen even with low level exposures, decreased intelligence in children, behavioral difficulties, learning problems, convulsions and even death.

Not everyone of the manufactures even agreed to be investigated by the congressional group. Nurture (sells Happy Family Organics and HappyBABY products), Beech-Nut, Hain (Earth’s Best Organic), and Gerber—agreed to the subcommittee’s request for investigation. The subcommittee also reached out to Walmart, Campbell, and Sprout Organic Foods, which did not allow the investigation.

And no surprise the attorneys are now circling the wagons for a feast. Baum Hedlund Aristei & Goldman said it started accepting toxic baby food lawsuit cases for parents who bought food from any of the brands and have children with autism and attention-deficit/hyperactivity disorder (ADHD). Both autism and ADHD have been associated with toxic metals. And a class action by parents is taking place in Nevada with the same bad actors, Gerber, Beech-Nut, and Plum Organics.  An not to be outdone, read this article, Baby Food companies now facing at least 43 lawsuits over heavy metals “. Did you know that Gerber makes up about 80 percent of the market, touting itself as a trusted name ?

Where do the toxic come from ?

Let’s get down to business, the contaminants from arsenic to lead exist in the environment, both naturally and when we contaminate the soil, primarily from pesticides and waste. The bottom line, we all eat some amount of these toxins daily however, the amount is vastly different between the contaminated and naturally occurring levels, with some caveats. Add to the load as some of the contamination is from how we store, process and transport our foods. The key is to look at all the aspects of foods from production to consumption.

“Pesticides in the Diets of Infants and Children” was a study by the National Academy of Sciences funded by the EPA and others.  Their charter granted by the Congress in 1863, mandates them to advise the federal government on scientific and technical matters. One of the real outcomes of their work was the “new” approach to risk assessments for infants and children along with recognition of the variability of the different foods followed by our lack of information on the effect with on infants and children from the various pesticides.

One of the first well done studies was the Environmental Working Group’s (EWG) tests on pesticide residues in 72 conventional baby food samples. The findings were that 16 different pesticides, including three probable carcinogens, eight neurotoxins and five endocrine disruptors were present.

What was then revolutionary at the time was a bill called the Food Quality Protection Act which required the EPA to show that all exposures to pesticides in food were safe for infants and children. You can access the AMS Pesticide Data Program (PDP) which provides pesticide residue monitoring supporting this requirement.

But let’s dive into the background of this problem that’s long been simmering. Back in 2017, a the Clean Label Project released their findings. Not equivocal results mind you that clearly should have been enough to have actions in place. Check out their infographic and tell me it’s not of concern ?  One quick read of their seminal paper,” Baby Food: A puree of Plasticizers and Heavy Metals” should have any parent concerned with commercial products. They checked 500 products including infant formulas, baby foods, baby cereals, pouches, and toddler drinks and snacks from 60 different brands. Yes, they were tested by a third-party lab.

A couple of decades into this fray, the Healthy Babies Bright Futures (HBBF) published their findings entitled, “What’s in my baby’s food ?”. Their tag line says it all; “A national investigation finds 95 percent of baby foods tested contain toxic chemicals that lower babies’ IQ, including arsenic and lead.”. They tested 168 baby foods with 95% containing toxic heavy metals and lots more bad news. 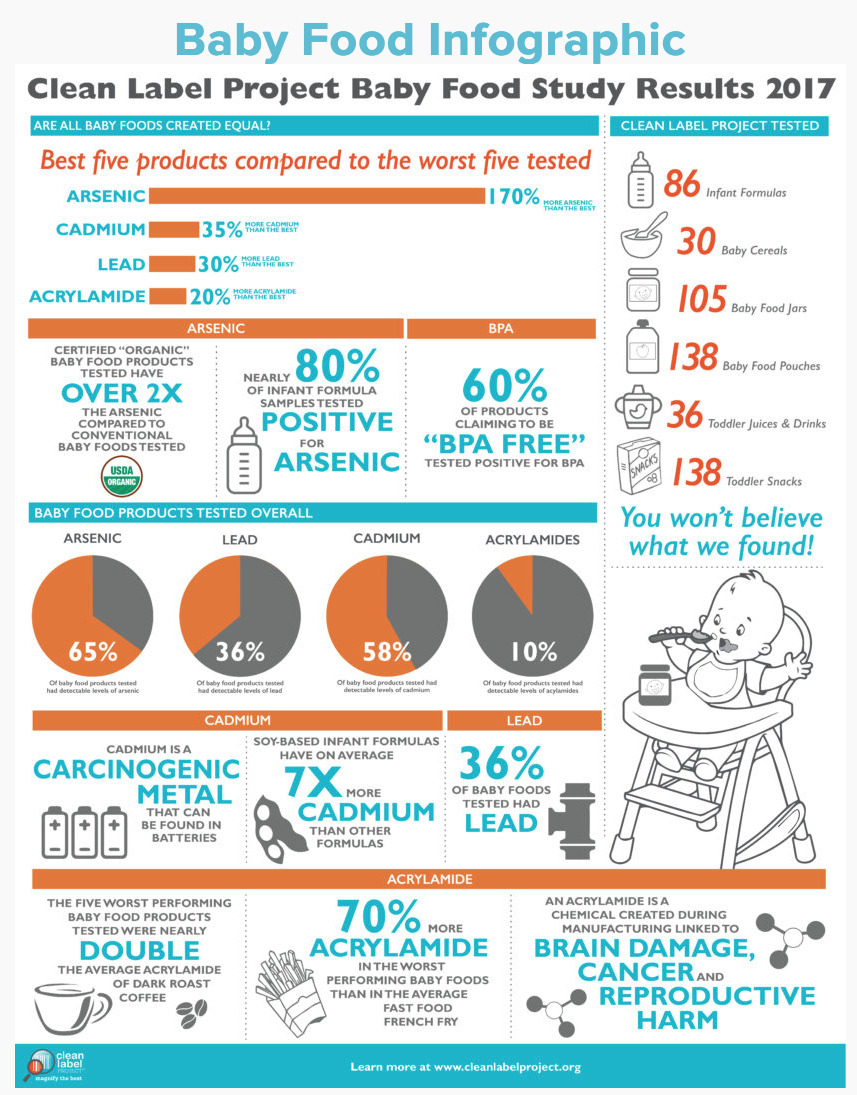 “We issued a letter to industry reminding manufacturers of these types of foods of their existing responsibilities related to these efforts. Secondly, the agency is announcing that we’ll soon be putting into action a plan aimed at reducing toxic elements in foods for babies and young children to levels as low as is reasonably achievable.”

FDA said it plans to increase inspections, issue guidance on the maximum contaminant levels in commercial food for babies and toddlers, finalize guidance on reducing inorganic arsenic in apple juice, and publish draft guidance on maximum lead levels in juice, among other actions.

Sorry but read between the lines, “remind”, “soon as reasonably achievable”…….sounds like we’ll need a few more decades to move from lower IQ’s to what nature intended for our infants and children.

About the Author: Alan Kadish